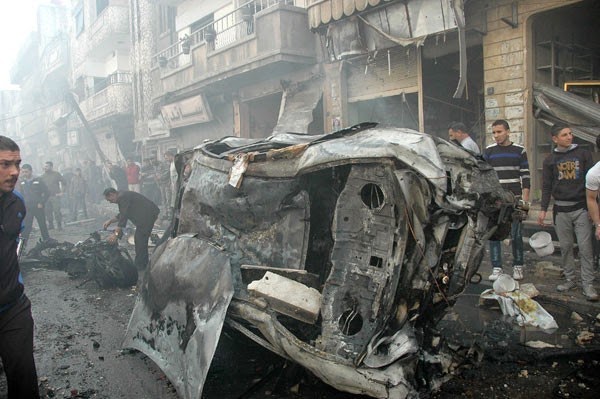 Provinces, (SANA) 25 citizens, including women and children, were killed and more than 107 others were wounded by twin terrorist explosions of two car bomb in al-Khudre street of Karm al-Loouz in Homs.

A source in Homs city told SANA that terrorists blew up a booby-trapped car they have parked near al-Badr Sweets in al-Khudre street which witnesses crowded traffic movement by citizens, adding that after half an hour, the terrorists exploded another car in the same neighborhood to claim lives of more citizens.

The two explosions also caused large damages to the citizens' properties, houses, shops and the cars, the source added.
SANA cameraman was injured during the second explosion while he was carrying out his duty in conveying the real events.

A source at Damascus Police Command  told SANA that terrorists fired two mortar rounds on al-Kabbas residential neighborhood, causing the injury of 2 citizens and material damage to a number of cars and markets.

On Tuesday, terrorists fired 4 mortar shells on the neighborhood, causing the injuring of two citizens and material damage to a number of cars.