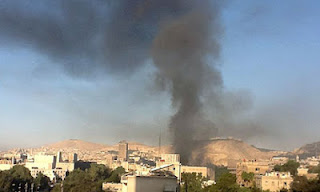 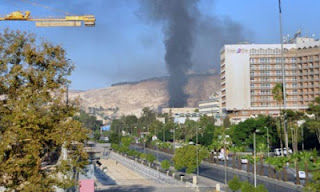 Rebel groups claim responsibility for attack in heart of Damascus, a day after emir of Qatar calls for Arab intervention.

The explosions, shortly after 7am local time (4am GMT) on Wednesday, have been followed by sustained bursts of gunfire in the surrounding area. Rebel groups immediately claimed responsibility for the attack, which they said had killed dozens.

Syria's ministry of information said there were no casualties from the blasts, which had caused "material damage" only.

Iranian Press TV said one of its correspondents, 33-year-old Maya Nasser, a Syrian national, died in an exchange of fire in the area following the blasts...