President al-Assad: Basis for Any Political Solution for Crisis in Syria is What the Syrian People Want- SANA 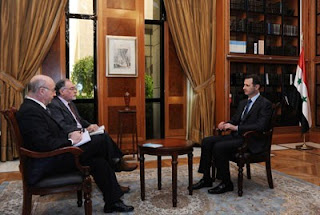 DAMASCUS, (SANA) – President Bashar al-Assad affirmed that the basis for any political solution for the crisis in Syria is what the Syrian people want, which is decided through ballots, saying that Syria welcomes the Russian-US rapprochement, voicing Syria's support for any suggestion which halts violence and leads to a political solution and its readiness to hold dialogue with any Syrian side which didn't deal with Israel secretly or publically and which rejects terrorism.
In an interview with Argentina's Clarin newspaper and Telam news agency, President al-Assad said that Israel supports terrorists, directs them and gives them the general plan of their movements according to its interests which intersect with those of several foreign sides including Qatar and Turkey which don't want a political solution in Syria and which support terrorism.
Following is the full text of the interview:
Q1:
What has made the Syrian Crisis so complex and protracted?
Firstly, numerous factors have influenced the Syrian crisis both internally and externally, the most significant of which is foreign interference. Secondly, the calculations of confrontational states that intervened in Syria have now proven incorrect. These states perceived their plan would succeed within weeks or months; this has not materialized. What has transpired is that the Syrian people have resisted, and continue to resist and reject all forms of external intervention. For us, it is a matter of safeguarding Syria.
Q2:
What is the total number of fallen victims in the crisis so far? Some sources report that the numbers exceed 70.000 people.
The death of any Syrian is a tragic loss, regardless of the numbers; but one has to examine the credibility of these sources. We cannot ignore the fact that many of those that have died were foreigners who came to Syria to kill Syrians. There are also many missing who have been accounted for as dead without real authenticity. This affects the accuracy of the quoted numbers of the death toll. How many are Syrians? How many are foreigners? How many are missing? At present, there is no precise comprehensive number to quote. These numbers are constantly changing. Terrorists kill people and often put them in mass graves. We can only discover and account for those losses after the Syrian army goes into these areas.