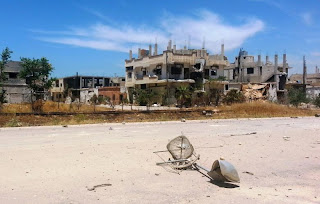 As the battle for Qusayr winds down, regime forces are preparing to wrest Aleppo from the Syrian opposition, which overran the city last July.
According to Syrian security sources, the Syrian army has begun building up its forces in several areas in preparation to storm opposition-controlled Aleppo. The sources explained that they are in the process of surrounding the city in order to cut off the oppositions supply lines.
If it were to succeed, then the regime would have managed to regain two of Syria’s most important governorates: Homs and Aleppo.
Homs was the “capital of the Syrian revolution,” until government troops retook the city. Ten months have passed since opposition fighters managed to flood Aleppo by the thousands, surprising both the regime and the city’s residents. The city had remained solidly in the loyalist camp for more than a year into the Syrian crisis and no one expected it to fall into the hands of the opposition so quickly and easily.
Government sources attributed the fall of Aleppo to the collusion Mohammed Mufleh, the former chief of Syrian Military Intelligence in Hama, with the opposition’s Farouq Brigade. According to military sources, Mufleh was paid a large sum of money to facilitate the passage of thousands of opposition fighters into the city.
Military sources maintained that the Aleppans were not particularly welcoming of the opposition, which committed massacres against whole loyalist families, like the Bazzi clan. The same sources estimated the number of fighters in the city may have now reached 20,000.