Under the black flag of al-Qaeda, the Syrian city ruled by gangs of extremists- The Telegraph 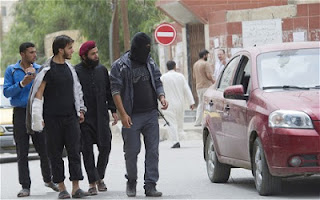 The black flag of al-Qaeda flies high over Raqqa’s main square in front of the smart new governor’s palace, its former occupant last seen in their prison. Their fighters, clad also in black, patrol the streets, or set up positions behind sandbags.