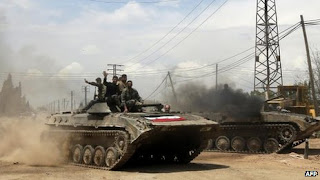 Syrian government forces have surrounded the rebel stronghold of Qusair and are storming it from several directions, says Syrian state TV.
Fighting has gone on around the town, near the Lebanese border, for weeks.
Opposition groups say militants from the Lebanese Hezbollah movement are fighting alongside government forces.
Correspondents say Qusair has strategic value for both sides. If the government retakes it, it would ensure access from the capital to the coast.
Russia, a key ally of Syria's President Bashar al-Assad, has a small naval maintenance facility at the Syrian deep-water port of Tartus.