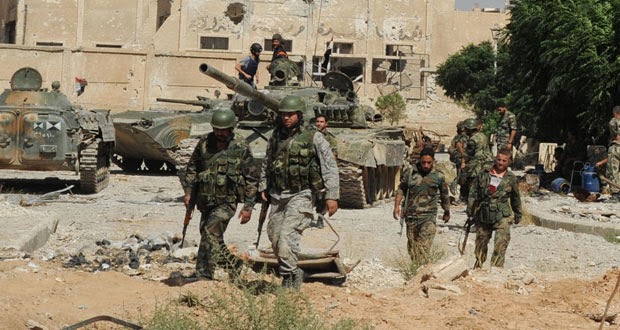 Provinces, SANA – Units of the army and the armed forces on Saturday launched wide-scale military operations against the terrorist organizations’ hideouts and gatherings, killing scores of terrorists and wounding others.
Homs
Units of the army killed a number of terrorists and injured others in the villages of al-Sultania, Rahoum and in Beit Rab’a in al-Rastan in the countryside of Homs central province, destroying a number of their vehicles.
In another context, reports circulated on the social media pages of the terrorist organizations said infighting and conflicts broke out among the organizations operating in al-Hilaliyeh village in al-Rastan upon them receiving severe blows and suffering heavy losses at the Army’s hands.
The reports stressed that many of the organizations’ members were killed in the army operations in the village.
Daraa
Units of the army destroyed dens and gatherings of terrorists in Daraa al-Mahata and in the towns of al-Sheikh Miskeen, al-Mleha al-Sharqiyya and al-Hrak in the countryside of Daraa southern province, killing scores of them and injuring others.
Operations against the takfiri organizations in al-Sheikh Miskeen yesterday resulted in the killing of over 50 of their members, including a so-called Military Prince of “Houran Lions” group, according to the organizations’ social media pages.
Units of the army killed scores of terrorists and injured others who were positioned in the western neighborhood of Bosra al-Cham city from which where they would launch attacks against the city’s civilian residents.
http://www.sana.sy/en/?p=21513
Gönderen Dr. Yasin ATLIOGLU
Email ThisBlogThis!Share to TwitterShare to FacebookShare to Pinterest
Newer Post Older Post Home