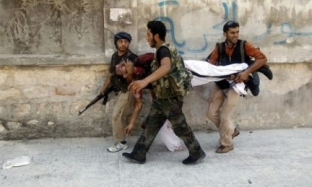 Syrian rebels have made advances into several central neighbourhoods in the city of Aleppo, activists say.
Reports said rebel fighters had moved into Christian areas just north of the centre as government troops withdrew.
The news came as Syria's government was due to give its reaction to a ceasefire proposed for this weekend's Eid al-Adha holiday by UN envoy Lakhdar Brahimi..