Dagan: One nuke not enough for Iran- The Jerusalem Post

Turkey denies cooperation with US against Iran and Syria

SOURCE: Arabic News
Turkish Foreign Minister Abdullah Gul on Saturday dismissed reports that the US had offered a deal to attack the PKK kurdish organization in return for allowing an attack on Iran.
German news agency (DPP) had claimed on Friday that CIA director Peter Goss requested support from Turkish PM Recep Tayyip Erdogan during his visit to Ankara last week for an aerial attack to Iran's nuclear plants, Cihan News Agency reported.
The report said Gul said that the top level visits from the US to Turkey were not related to third countries, including Iran and Syria. "Those claims are pure imagination," Foreign Minister Gul told the reporters on Saturday in the city of Bursa.
The DPP had claimed in the news that Goss, in return for Turkey's support, promised that Turkey would be allowed to hold raids against PKK camps in Iran, by letting Turkey know that the US offensive is to begin in a few hours on the same day.
Turkey has long strategic relations with USA, however, the relations between Turkey and neighboring Iran have also improved in remarkable ways in recent years following reciprocal trust boosting measures
Gönderen Dr. Yasin ATLIOGLU
Email ThisBlogThis!Share to TwitterShare to FacebookShare to Pinterest 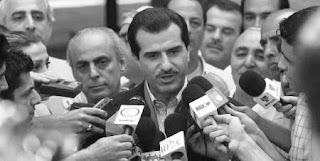 A Syrian witness who has accused al-Hariri's son Saad of bribing him to testify falsely, said on Monday that a report by UN investigator Detlev Mehlis implicating Syrian and Lebanese officials in the assassination was based mainly on his own lies.

"This political senility and this deception by the Syrian security apparatus is a laughable farce and at the same time it seems they will use all means, even security, to shake up security [in Lebanon] to try to confuse the inquiry," Jumblatt said on Tuesday.

The Druze leader, an erstwhile ally of Damascus who turned into a fierce critic of Syria's military presence in Lebanon, said the Syrians still had a security network in the country.

Syria dominated its neighbour politically and militarily for almost three decades until a Lebanese and international outcry over al-Hariri's death forced it to withdraw its troops in April.

A series of bombings and assassinations has rocked Lebanon since, targeting politicians and prominent journalists.

In a televised news conference in Damascus, Hussam also accused Jumblatt and Lebanese Telecommunications Minister Marwan Hamadeh of getting other witnesses to testify falsely to Mehlis.

Jumblatt and Hamadeh have denied the allegations.

The UN investigation has confirmed Hussam was a witness but said he signed a statement on 1 September saying that he was testifying voluntarily and had not been forced, threatened or given incentives.

It made no comments on his assertions about the weight placed on his testimony in the Mehlis report.

Hussam's appearance came after Damascus agreed to allow five Syrian officials to be questioned at UN offices in Vienna in connection with the Beirut truck bombing that killed al-Hariri.

"We will not rest until we see the suspects behind bars," Jumblatt said of those behind the 14 February assassination.

"What does the timing of this person's (Hussam's) appearance mean?" Jumblatt asked.

"On the verge of the Vienna meeting, they are trying, and will not succeed, to shake Mehlis's credibility. We trust Mehlis and the international investigation."
Gönderen Dr. Yasin ATLIOGLU
Email ThisBlogThis!Share to TwitterShare to FacebookShare to Pinterest

Source: SANA
10.11.2005
Before I start this speech, I would like to say that I was asked several times last week, why I look pale, and whether it was because of the pressures. I said no. In fact I was a little ill. I am saying this so that I do not get asked the same question again. Political circumstances make us more united; and when we get united we become stronger and livelier. This speech was scheduled for next week; but because of the fast pace of developments, I decided to make it today.