The defense of Hayat Tahrir al-Sham (formerly the Syrian branch of al-Qaeda) and other favourites of foreign supportes ‘the Syrian democracy’ are collapsing in the province of Idlib. 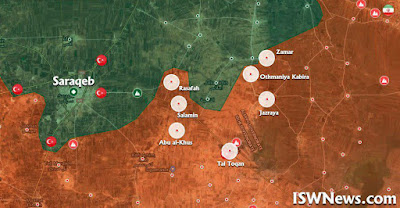 Following large gains on February 4, the Syrian Army continued advancing on February 5. Government forces liberated the town of Resafah and several nearby villages. Thus, they isolated the militant stronghold of Sraqib from the eastern direction.

The advance came amid an intense bombing campaign by the Syrian Air Force and the Russian Aerospace Forces. Turkish observation posts created in the area apparently do not help to contain the Syrian Army offensive.

If the situation develops in this direction, Saraqib may be fully encircled by the end of the day.

Erdogan Urges Syria to Back off Turkish Observation Posts- Naharnet

Turkish President Recep Tayyip Erdogan urged Syria on Wednesday to withdraw its troops from its military observation posts in northwestern Idlib province where clashes have intensified in recent days.
"At the moment, two of our 12 observation posts are behind the regime's lines. We hope the regime will withdraw from our observation posts before the end of the month of February," he told a meeting of his ruling party in Ankara.
"If the regime does not pull back, Turkey will be obliged to take matters into its own hands."
Eight Turkish troops and civilians were killed on Monday by regime fire in Idlib -- the last opposition bastion in the conflict-torn country.
Turkey killed at least 13 Syrian government troops in response, according to monitors, in the deadliest clashes since Ankara sent troops to Syria in 2016.
Erdogan has criticised Russia, a key backer of President Bashar al-Assad's regime, for failing to enforce peace agreements in the region and called for Moscow to "better understand our sensitivities in Syria".
"From now we will not turn a blind eye to any step that constitutes the violation of the agreements," he added.
Erdogan said this week's clashes amounted to a "new era" in Syria, and that any further attacks would be "responded to in kind".
"The air and ground elements of the Turkish armed forces will freely move in the Idlib region and if needed will launch an operation," he said.
http://www.naharnet.com/stories/en/268867-erdogan-urges-syria-to-back-off-turkish-observation-posts
Gönderen Dr. Yasin ATLIOGLU
Email ThisBlogThis!Share to TwitterShare to FacebookShare to Pinterest

The Syrian Army and its allies have liberated 110km2 from radical militants in the Syrian province of Idlib since February 4 morning. The former militant strong points of Sheikh Edris, Balisah, Tal Mardkih, Kafr Amim are within the liberated area. 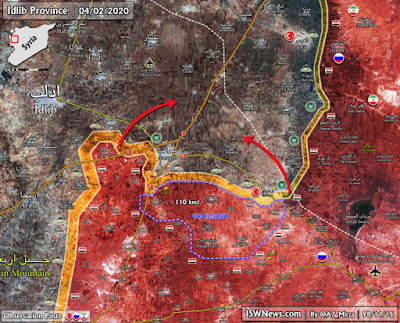 With this advance, government troops secured the entire southeastern countryside of the militant stronghold of Saraqib, which Hayat Tahrir al-Sham (formerly the Syrian branch of al-Qaeda) and other radical groups use as a key hub on the crossroad of the M4 and M5 highways.

Turkish President Recep Tayyip Erdogan earlier expressed readiness to retaliate after its servicemen were killed in the province of Idlib in an attack by Syrian government forces.
The General Staff of the Syrian army said it gives one last chance to the militants operating in the province of Idlib to lay down their arms, Ikhbariya news agency reported on Tuesday citing a military source, adding that the Syrian Army was ready to repel any Turkish aggression in the province.
"Our armed forces are trying to give the last chance to the militants and save the lives of the besieged civilians. The army units operating in the region have been ordered to allow those who decide not to rely on the support of the Turkish forces, to surrender their weapons", the source said.
The source added that the Syrian Army was continuing its military operation against the militants, who have been fighting civilians and using them as "shields" in Saraqib and Tell Touqan in Idlib.
On 3 February, the Turkish Defence Ministry said that six Turkish servicemen had been killed in an attack by the Syrian Army in Idlib.
The Turkish military presence in Syria has never been sanctioned either by Damascus nor the UN Security Council. Turkey says its forces are deployed in the region in order to prevent conflicts in Idlib.
Fighting has escalated in Syria's Idlib recently, as the Syrian government has been struggling to recapture control over the area, which remains a major terrorist stronghold in the country.
https://sputniknews.com/middleeast/202002041078228527-syrian-army-gives-idlib-militants-last-chance-to-lay-down-arms---syrian-tv-citing-military-source/
Gönderen Dr. Yasin ATLIOGLU
Email ThisBlogThis!Share to TwitterShare to FacebookShare to Pinterest

BEIRUT, LEBANON (9:15 P.M.) -Syrian Arab Army (SAA) forces advanced with armoured vehicles, tanks and heavy artillery deeper into the Idlib countryside, closing in on the town of Saraqib on Monday.

Footage shows heavy artillery being fired, explosions in the distance and helicopters in the sky.

UN Secretary-General Antonio Guterres called Tuesday for an end to fighting between Turkey and Syria in Syria's opposition-held province of Idlib on Tuesday.

Guterres told reporters it was an "extremely worrying" escalation in the conflict that the Turkish army and the Syrian regime were now "bombing each other" in the restive northwest region.

"My strong appeal is for a cessation of hostilities," he said.

"We don't believe there is a military solution for the conflict in Syria. We have said time and time again that the solution is political," Guterres added.

Idleb, SANA- During their operations against terrorist organizations in the direction of Saraqeb City in Idleb Syrian Arab Army units have liberated al-Nairab village, north of Aleppo-Lattakia International Highway after fierce battles with terrorists’ gatherings in them.

SANA’s reporter said that after liberating the villages of Joubas, San and Trinbeh on Monday, army units intensified their operations in the direction of Saraqeb in Idleb southeastern countryside and liberated the village of al-Nairab to the north of Aleppo-Lattakia International Highway after destroying terrorists’ fortifications and a number of their positions and after forcing them to flee away, in addition to cutting their supply routes between Saraqeb and Ariha.

The reporter added that army units today have engaged in fierce clashes with terrorist groups in the surroundings of Kaddour and Rwaiha west of Saraqeb amid a state of collapse among the ranks of terrorists after destroying their frontlines and fortifications.

SOHR sources report that intensive aerial bombardment continued on various areas in Idlib province. Russian and regime jets have carried out dozens of airstrikes since after midnight, targeting places in Binnish, Taftanaz, Sarmin and near Idlib city, Qominas, Afis, Taftanaz, Saraqeb and villages east of Saraqeb, and other places in Al-Zarbeh and the frontlines in southern and south-western rural Aleppo.

Syrian Observatory sources added that regime forces made new advances, capturing Mardikh, Tal Mardikh, Kaddor and Ruwayha, located within the areas of Ma’rat al-Numan-Ariha-Saraqeb, after the withdrawal of opposition fighters from it. Regime forces seek to encircle Saraqeb and besiege it from several directions, as happend in Ma’rat Al-Nu’man, and seeking to approach Ariha and Idlib city as well.

Rif-Dimashq Governorate – Syrian Observatory for Human Rights: Reliable source informed SOHR that Political Security and Military Security joint patrols carried out a raid in the city of al-Tal in rural Damascus, during which pro-regime militia commander was arrested with 20 of his members.

According to Observatory sources, the leader was arrested for carrying out continuous looting in the city illegal taxation on merchants in the city and deploying checkpoints on side roads and robbing citizens on an almost daily basis. “Shield of Qalamoun” militia, which was completely disbanded by Russian orders about a year ago, included fighters of those who made reconciliation with regime from various areas of al-Qalamoun in rural Damascus. 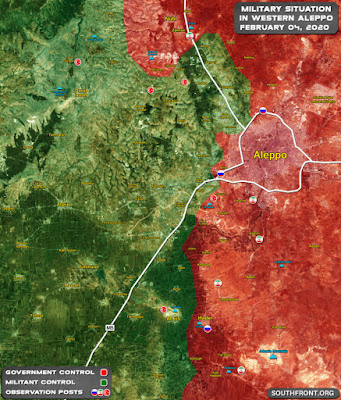 This map provides a general look at the military situation in western Aleppo following recent advances by the Syrian Army against Hayat Tahrir al-Sham and other radical groups.

BEIRUT, LEBANON (2:30 P.M.) – The Syrian Arab Army (SAA) scored a big advance in Idlib on Tuesday when their forces began a new push at the Abu Jarif axis in the eastern part of the governorate.

According to a field report from eastern Idlib, the Syrian Arab Army captured a half dozen villages and towns on Tuesday following a fierce battle with the jihadist rebels of Hay’at Tahrir Al-Sham (HTS).

The Syrian Army reportedly captured the towns and villages of Kuweres, Bleisa, Tal Aghar, Al-Musheirifah, Jdeideh, and Tal Khatrah during their advance at the Abu Jarif axis in eastern Idlib.

BEIRUT, LEBANON (9:30 P.M.) – The Syrian Arab Army (SAA) made an important advance in the northeastern part of the Idlib Governorate on Monday, as their troops managed to reach an imperative highway.

Led by the 25th Special Mission Forces Division (formerly Tiger Forces), the Syrian Arab Army kicked off the day by capturing two towns located southwest of Saraqib.
Not long after capturing these two towns, the Syrian Arab Army pressed further northwest towards the strategic Aleppo-Latakia Highway (M-4).
The Syrian Army would once again seize two towns, but this time they were able to establish their first presence along the Idlib part of the Aleppo-Latakia Highway (map below).
https://www.almasdarnews.com/article/new-map-of-idlib-battle-after-syrian-army-reaches-strategic-highway/
Gönderen Dr. Yasin ATLIOGLU
Email ThisBlogThis!Share to TwitterShare to FacebookShare to Pinterest

Idleb, SANA_ Syrian Arab Army Units on Monday resumed their concentrated military operations against terrorist organizations in Idleb southeastern countryside and advanced into the direction of Saraqeb after liberating the villages of Joubas, San, and Tarnaba towns and destroying the last terrorist gatherings there.
SANA reporter said that Syrian Arab Army units engaged in violent clashes with terrorists on Monday afternoon and routed them out in areas in the direction of Saraqeb, liberating the village of Tarnaba in the process, and the army is still engaged in violent clashes with terrorists in al-Nairab village north of the Aleppo-Lattakia highway between Saraqeb and Ariha.
The reporter added that units of the army killed members of a terrorist group, affiliated to the so-called “Jaish al-Fatah” in the surroundings of San town. The number of the killed terrorists reached 7 ones, some of them of foreign nationalities.
He said that with the liberation of Tarnaba and crossing the Aleppo-Lattakia highway, the army has cut off terrorists’ supply lines between the cities of Saraqeb and Ariha.
Earlier in the day, the reporter said army units had advanced in the direction of Saraqeb, liberating Joubas and San west of the city.
https://www.sana.sy/en/?p=184182