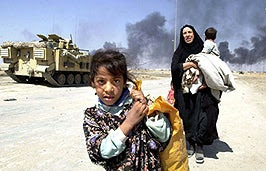 In For the Kill (Scott Macleod- Time)

Although Turkey and Syria has close historical and geographical ties, physcological prejudices and security concerns has long kept them apart in terms of politics and ekonomics. Problems created during that period not only caused these countries to lose political and economical power, but also increased hostility and instability in the entire Middle East Region. Since 1998, the rapprochement between Turkey and Syria as a result of their foreign policies based on good intention, cooperation and friendship has revived political and economical potentials of both sides. Turkish-Syrian relations that have deep historical background and continuity, and also political existence of Syria are necessary conditions for Turkey to be effective in Middle East as regional power and security of Anatolia.

Syria: It's all over, but it could be messy (Volker Perthes- The International Herald Tribune )