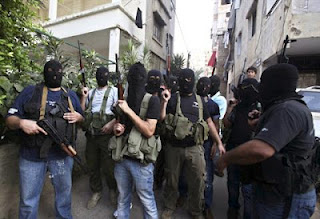 ROUEISS, Lebanon: Though known for their armed clashes and running vendettas, a veil of intrigue surrounds the clans of Lebanon’s northeast region of Baalbek-Hermel.

The Meqdad family, which in the last two days snatched dozens of Syrians in retaliation for the kidnapping of a relative in Syria, is no exception. In the first floor apartment of a building on the Meqdad Street of the Beirut southern suburb of Roueiss, family members, relatives, neighbors and journalists crowd the reception area and the large terrace.

They all wait for updates from Maher Meqdad, the clan’s spokesperson, who is in constant contact with the family’s so-called “military wing.” The wing, made up of the men who appeared on television Wednesday wearing masks and armed to the teeth, is tasked with carrying out the kidnappings.