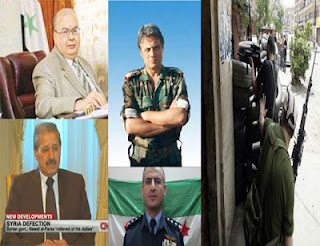 The role played by the Emirate of Qatar and its recruited capabilities in the regional events are no longer hidden for anyone. Perhaps this role has been gradually unfolded in parallel with the exacerbation in the Syrian crisis. The Qatari role is revealed as a main driver of what is going on the Syrian territory through the militarization and embracing opposition members and dissidents.

Sources of a Western capital, “friendly to Doha", revealed Wednesday that the Gulf emirate has allocated $ 300 million to create splits within the ranks of military and political Syrian officials.
According to the Iranian Fars news agency, the sources stressed that "signs of these funds began to emerge recently," noting that "it is naïve to think that the defection of some low-level officials from the embassies staff or of those fame for being corrupt over many years was due to humanitarian or liberal motivations," asserting that these cases are "fruits of the money allocated by Doha for this purpose.”
The sources pointed out that "the U.S. parallel scenario emphasizes that "work should continue to convince ambassadors, officers and senior Syrian officials to dissent. This is to be done through deploying armed groups in Syria, political oppositions abroad and some of them at home, via sticks and carrots.”
“Large amounts of money are offered in an attempt to convince those people that the regime is inevitably outdated," according to their in their own words.