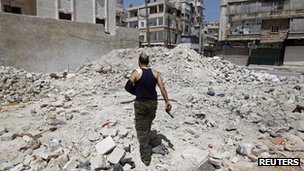 Arab League foreign ministers have postponed a meeting in Saudi Arabia to debate the crisis in Syria.
The ministers had been due to discuss a new envoy to Syria to replace Kofi Annan, who resigned earlier this month.
The US Secretary of State Hillary Clinton has said the US and Turkey are working together on detailed plans to support the Syrian opposition...